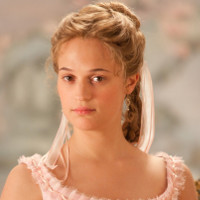 Princess Ekaterina 'Kitty' Shcherbatskaya is a character from Anna Karenina.

The similarity between two characters can be calculated by taking the correlation between the lists of their traits. This produces a value from +1 to -1. With +1 implying that every trait one character is high on the other one is high on too, to an equal degree. And, -1 implying that if a character is high on specific trait, the other one is low on it. The 10 most and least similar characters to Princess Ekaterina 'Kitty' Shcherbatskaya based on their crowd-sourced profiles are listed below with the correlation in parenthesis.

Users who took the quiz were asked to self-identify their Myers-Briggs and Enneagram types. We can look at the average match scores of these different groups of users with Princess Ekaterina 'Kitty' Shcherbatskaya to see what personality types people who describe themselves in ways similar to the way Princess Ekaterina 'Kitty' Shcherbatskaya is described identify as.